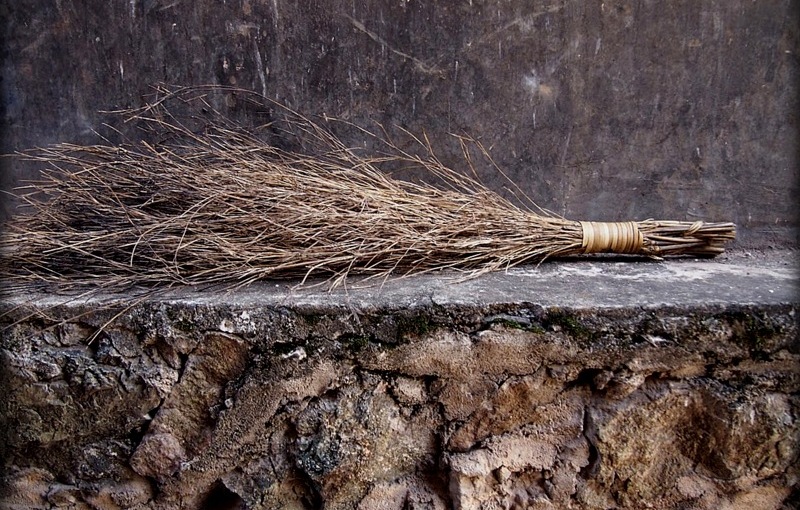 In China, where everyday life is busy, complex and often crowded, order creates harmony. It enables Chinese life to function smoothly. Orderliness can be seen in the cleanliness of the streets, the hygiene applied to food preparation and the public behaviour of Chinese people. The ancient principles of Confucianism,  a philosophical system of norms and propriety that determine how a person should act in everyday life, underlies many aspects of Chinese modern society. Later overlays include the philosophical and religions values of Buddhism and Taoism, along with the modern political system of Communism. You can see these values at work in your travels throughout China, not just in grand temples or fine restaurants, ancient walled pedestrian towns, or beautiful calligraphy and design, but also in ordinary everyday things- in the placement of a small straw broom, in the tiered arrangement of bamboo steaming baskets in a busy take away street stall, or in the beautiful designs on front doors. 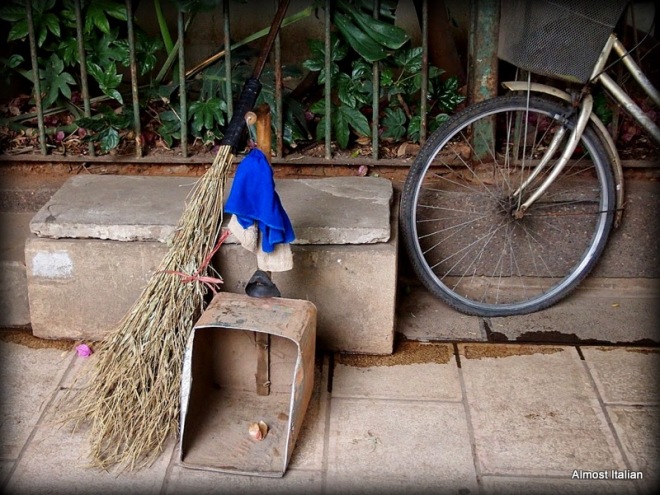 Photos from travels in China, August 2015. Adapted from my post of June, 2017. More virtual trips to China will be aired this month as I never really did write much at the time. That was a busy 4 week schedule, travelling by train through Yunnan Province, and then with friends through Sichuan province by car, leaving little time for writing.

Notice the rooftops of these apartment buildings in Kunming, Yunnan Province, China. They are covered in solar hot water units.

I was pleasantly surprised to see the ways in which the Chinese are embracing change: in fact, Kunming’s initiatives in the solar industry field made a huge impact on me. It removed all those stereotypical views one might hold about China, overcrowding and pollution. They are working on change at a rapid rate.

Australia is a land of plentiful sunshine whose political leaders are backward in accepting change. This happens at the Federal, State and local government level. All have their heads in the sand, even those who purport to be Green. Our local councils could be leaders in change, by insisting that all new inner city developments and apartment blocks include solar features.

In the photo below, the dedicated motorbike and bike lane is sectioned off from the other traffic. I wandered down these wide boulevards and was not aware of the any motorbike noise or pollution: I then observed that they were all electric.

In July 2008, Kunming began to implement a program to transform the city’s solar energy industry into a US$8.8 billion industrial base in China by 2013. Kunming receives an annual average sunshine of more than 2,400 hours. Each 1 kW PV system has the potential to generate 1500 kilowatt-hours of electricity a year from solar energy.

The government plans to put in place policies (low-interest loans, tax exemption and other concessions or subsidies) and a fund to encourage private sector participation in the city’s solar energy-based infrastructure development. The fund, which will be included in the municipal government’s annual budget, will particularly finance LED for public lighting, solar projects, and the propagation of energy saving projects.

Doors in China are the most important feature of a house. The front door lets in good energy and welcomes family and friends, but also keeps away demons and intruders. Inviting but guarded. Solid and protective.

I adore a good door! Some great doors in China may be found in Dali and Lijiang, Yunnan Province. Both are ancient walled cities and free of traffic, the latter being a Unesco world heritage site.

Celebrating Chinese New Year here in Australia, means planning a few little dishes from that wonderful country. A refreshing salad for a hot day, Cucumber salad Yunnan Style makes use of the current cucumber and chilli glut. My addition of tuna is not traditional but transforms the salad into a light lunch. Leave out the tuna if using the salad as a side dish.

I am using my apple cucumbers as these have appeared in plague proportions. They are too seedy for most dishes, but with seeds removed, work well in this quick and easy salad.

Travelling around Yunnan Province, China this year, it was a pleasure to spend a week in the ancient town of Dali. After each long day of walking and touring around Lake Erhai, we would return to our comfortable guesthouse, the Jade Emu, run by a Chinese -Australian couple. Next door, they also run a quaint little restaurant, La Dolce Vita, with an Italian menu, wine, along with a book exchange, cafe and DIY laundry. These Western services are most welcome, especially for the long term guest,  but then so are the broken bikes used as decor.

The husband is from Melbourne: this would explain the broken bikes in the cafe garden, an appealing idea to copy.  Melbournians love to up-cycle junk. 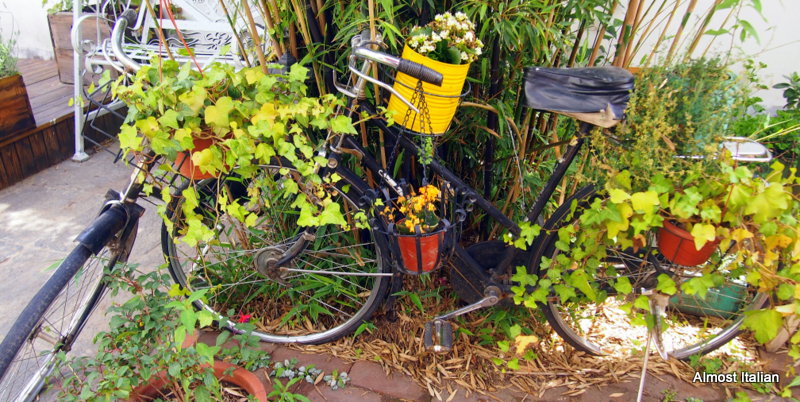 The Jade Emu is located in a quiet precinct just off the Yunnan -Tibet Highway, a road that I wouldn’t mind travelling along next time.

Thanks once again to Ailsa for the travel theme.

We’re back in Lijiang, Yunnan Province, China. At night, the bars light up, with each bar employing a band or singer. The noise can be overwhelming, but the locals love to party.  I preferred wandering the streets of this ancient Chinese city in the day time, when the cobblestoned streets were quiet and empty.

You can find some more noisy shots at Ailsa’s travel photography site.  And I recommend my brother’s take on this theme too. Take a look at Mick’s Cogs.

Merchandise in the old towns of Dali and Lijiang, in Yunann Province, China,  is colourful and tempting. Lijiang is a Unesco World Heritage site with an altitude of 2,500 meteres above sea level. It can get cold at night, even in summer. Both towns are popular with young Chinese travellers, particularly on the weekends, when they come to party and shop. The cobblestoned streets are closed to traffic, making the evening promenade a pleasant experience.  An appealing travel challenge from Ailsa this week.