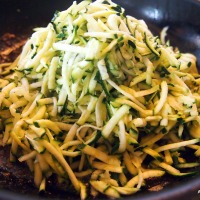 After an early morning stroll to visit the morning of the world, I wander to my nearest temple, a small seaside Pura with statues swathed in yellow cloth and pay my morning respects from a polite distance. Mt Agung has been very shy this July, hiding behind a shield of cloud and morning mist, though his twin, Mt Rinjani in Lombok, sometimes pops up on the horizon. I know Gunung Agung will appear one day soon.

Today has been rather quiet on the streets, as the day before Galungan is considered by most to be an important preparation day for tomorrow’s holiday. Some men were still busy creating and installing their penjor. There’s a sweet and spicy aroma in the air aroma as men prepare the lawar in the courtyards of their homes: 5 spice, sweet kecup and other exotic ingredients are mixed for the Lawar. The shops are closed and aimless tourists wander around, wondering what the big holiday is all about. 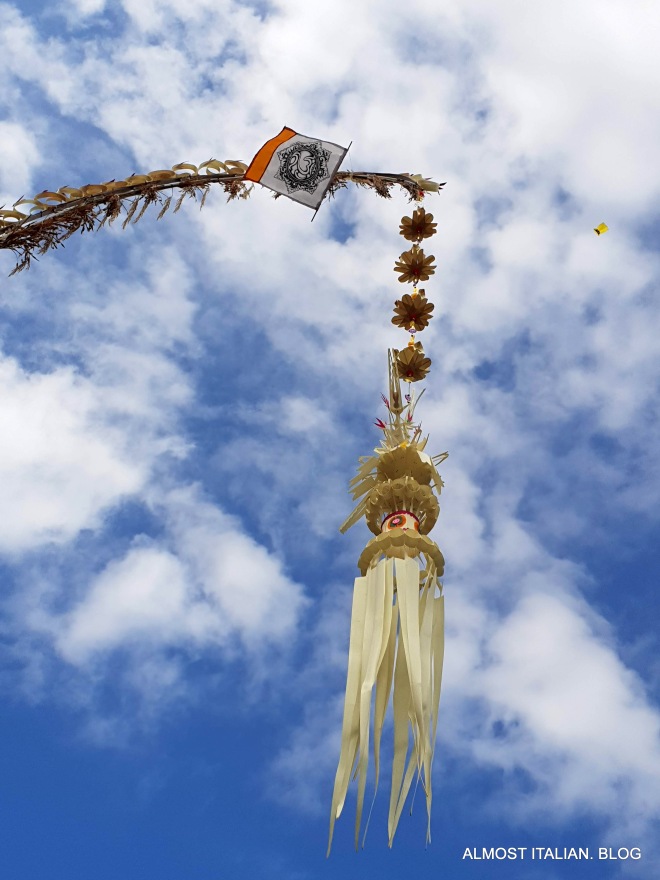 Down the back lanes and in the suburbs of Sanur, the penjor are rather lovely as they wave their earthly offerings to the spirits above. There’s always someone keen for a chat along the way too.  That’s what I love most about the Balinese.

At the base of each penjor is a little basket which will hold the offerings of rice cakes for the ancestor spirits. I look forward to further documenting this special Hindu event tomorrow.

A distant bird sings a slow, repetitive gok gok gok, a rhythmic sound, like a percussion of coconut shells or a forest gamelon band: it gently seeps into my consciousness. Further away, waves break on the fringing reef. Above, a giant black kite reaches for the clouds. It’s a warm Sunday afternoon and the gentle breeze lifts the kite sky high and ruffles the lush greenery in the garden below. But all this lazy Sunday tranquility is deceptive: the Balinese are busy and preoccupied as they prepare for Galungan. The anticipation and excitement is palpable and infectious. The topic comes up in almost every conversation. Some are eager, some are already tired from making offerings, but all are involved as the days count down from Sunday to next Wednesday, July 24th, Galungan day. 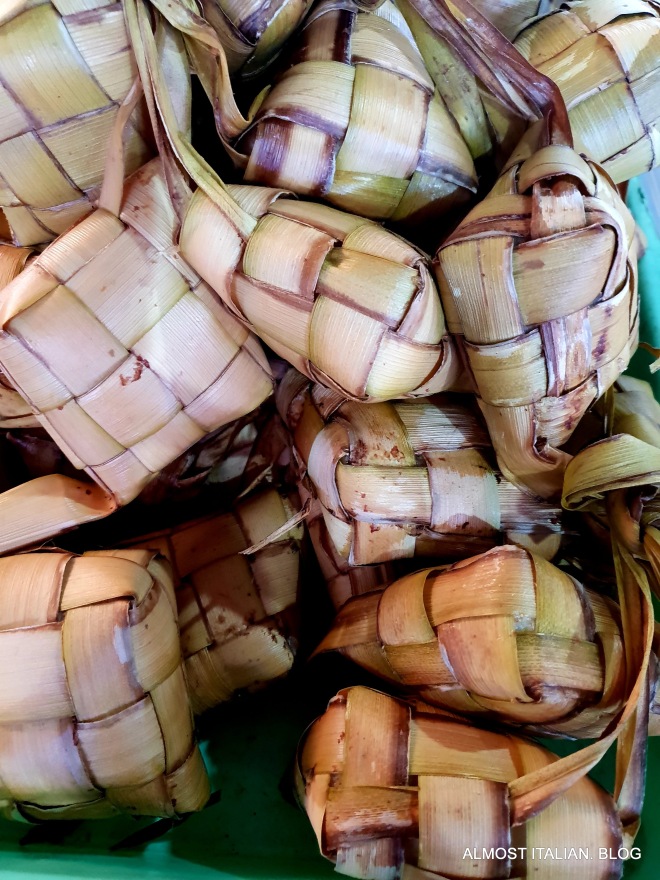 Galungan is one of the most important days of the Balinese calendars. It is the day when the spirits of dead ancestors descend to their former family homes. They must be welcomed and entertained with beautiful decorations, offerings, feasting and prayers. These ancestor spirits stay for a week, and leave on Kuningan day, which occurs on August 3rd this year. Galungan always occurs on the Wednesday of the 11th week in the Pawukan Calendar, the Balinese 210 day calendar that governs most anniversaries, auspicious days and religious events. It is possible for two Galungan events to fall within the same year, though in the 40 years I’ve been visiting Bali, this will be my first experience of Galungan. 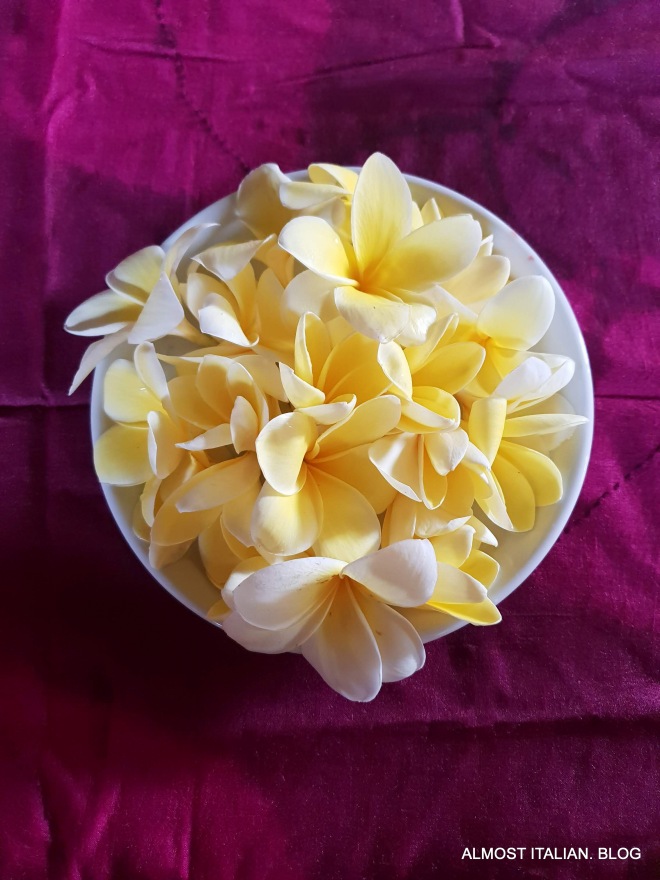 Everyone has a role to play in the preparations. I’ve been watching teenage lads and young men cart huge bamboo poles around on motorbikes, dragging them down lanes and through markets. These green bamboo poles are then bent into shape and decorated to make the Penjor. During Galungan, Penjor frame the entrance to a village, a house or driveway, or form a colonnade along the streets. They begin to appear on Monday July 22. The task of creating a penjor is given to men and their sons, and each one I’ve met is very proud of their creation. Each penjor is unique but made using the same basic ingredients. The bamboo pole is arched at the top, representing Gunung Agung ( Bali’s sacred mountain), the body represents a river flowing from the mountains to the sea, and along its route are the products of the harvest tied to the pole: at the foot of the pole is a temporary shrine. Unlike the artificial tinsel and baubles of Christmas which make an annual appearance and then are stashed away, a penjor is made annually and consists of local, natural materials.

The celebrations start on the Monday ( Penyajaan) as women prepare coloured rice cakes or jaja which are used as offerings. At this morning’s traditional market, Pasar Sindhu, rows and rows of jaja were available for those busy women who don’t have time to make their own. On the Tuesday, called Penamphan, pigs are slaughtered to make the traditional feast lawar, a spicy ground meat dish eaten on the morning of Galungan. I spoke to a friend this morning, Ida Bagus, who was looking forward to making the lawar, having already prepared the marinade. The making of lawar is also a male duty. In contrast, I had an interesting chat with Ketut, an amusing young woman in her 40s who runs a kitchenware shop in the market. She was complaining about men taking credit for their Penjor and Lawar, while the women make small canang sari containers for a weeks ahead of Galugnan, along with hundreds of rice cake offerings and other festive foods, only to spend each day cleaning up, while the men lie about relaxing on Galungan day, eating and drinking rice wine.

Galungan celebrates the creation of the universe, the victory of good, Dharma, against evil, Adharma. It s a time for prayer, family get togethers, and offerings. On the day following Galungan, families will visit other friends and families in villages across Bali and the celebrating will continue. It’s a sweet and precious time for the Balinese, but then, most days are. There’ll be more ceremonies to discover next week, if not every day after that. 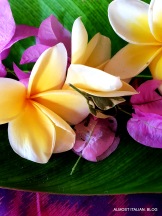 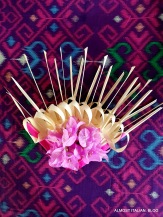 I have borrowed extensively from Bali Sekala and Niskala, Essays on religion, Ritual and Art. Fred B Eiseman, Jr. 1990, Tuttle Publishing.

Would you like more of Bali in your daily life? For the next three months I’ll be documenting aspects of Balinese life, at instagram@morgan.francesca