Testaccio in ancient times was the centre of trade along the Tevere, and in the centre of this suburb stands Testaccio Hill, which is made up entirely of broken clay amphorae or vessels, a kind of Roman midden pile, providing archeological evidence of ancient everyday Roman life. I would love to go digging in that pile of remains, a highly unlikely prospect. In the meantime, I went digging for culinary treasure at the Testaccio market, a venue often heralded as one of Rome’s food havens.

Testaccio is a plain looking working class suburb that is on the turn. The bars and restaurants look more appealing than many of those located in the tourist traps around Rome, though they are being discovered and some are beginning to blandify their offerings to suit small tour groups run by American food bloggers. In one such establishment, Flavio Al Velavevodetto, I had the best Carciofi alla Giudìa, that classic Roman Jewish dish of deep-fried artichoke, and a rather insipid Pasta e Ceci, redeemed only by the cute bottle of their own freshly pressed olive oil, which went straight into my handbag. The restaurant is carved into Monte Testaccio and you can view amphorae shards in the hill through carved out arches in the rear wall.  Perhaps this is a worthy reason to visit in itself.

The Testaccio market building is modern, fairly ugly, and not particularly appealing. However, If you have an apartment in centro and are after fresh ingredients, this is the spot to shop. Other offerings include an outdoor cafe, a shop touting a list of so-called Strit Fud snacks, a concept I still find jarring in the Italian context, and a wonderful little corner bar offering a tall glass of Prosecco at any time in the morning for €2 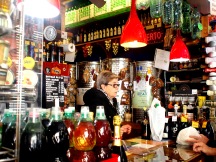 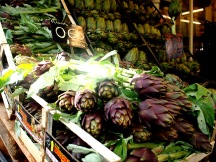 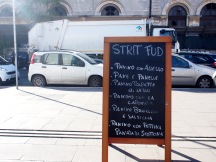 I was intrigued by the padrone of the prosciutto shop, who hand cut his special cured meats. A small crowd gathered as he carefully shaved off thin slices of Cinta Senese, that Tuscan pig with its own DOP.

While the produce is fresh and appealing, the market was, for me, underwhelming. We needed that glass of Prosecco.

Rome you seduce me

and begging me to return

For Unlikely, at WordPress and Ronovan’s weekly Haiku