Putting lemons down for later. A great year for citrus of all kinds means preserving the tang for later. Preserving organic lemons with good sea salt without additives, some bay leaves and coriander seeds. Have you tried these chopped through smashed potatoes? #lemonsandlimes🍋 #inmyorchard #morganico🍋#preservingthecrops
#blackouttuesday
Another flash slash on a firm skinned rye. With 17% rye and 2 large slurps of molasses, it's a sticky beast to work with but still tightens up with an overnight rest in the fridge. #sourdoughbabies #sourdoughintherye #mydailybreadandwine
Winter. Heavy rain pounding on the tin roof. A fire glows in the wood stove. A young girl tastes an old fashioned rice pudding. #moodywinter #ricepuddings #daisythechef
Today's sourdough bake using Maree' Tinks reliable recipe. I forgot about these loaves, so the slightly charred crust will be interesting to slice. The round loaf had a Glenn Close slash, though I don't feel the slightest bit angry. I love the way loaves turn a bit rogue, depending on the weather and random attention span of the baker. #sourdoughbabies #sourdoughbakingaustralia #australiansourdough #breadbosses #mydailybread
Comfort food to go with a lazy day in front of the fire. Baked rice pudding, quince jelly and blackberries. Recipe from Diane Henry's 'From the oven to the table.' Now for another scoop. Diane Henry is my favourite food writer. #dianehenryrecipes #ricepuddings #oldfashionedsweetthings #quincejellyjam 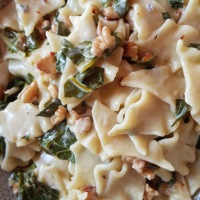 Limes are often associated with hot weather and all things tropical- Mojitos by the pool, spicy Thai food, Indian lime chutney, and Mexican guacamole, just to name a few treats where limes play a key role. Because of these culinary associations, I tend to feel like indulging in lime laced dishes in summer. And yet my own lime trees prefer to crop in the cooler months. One week before winter and the Tahitian limes are in their prime. This calls for a week of lime recipes.

Soon after arriving at our new place, we planted three limes, three lemons, one orange, one mandarin and a kaffir lime. The limes are the happiest of all the citrus family. Given the glut, I have been exploring new ways of using them. Dried lime peel gives an interesting note to a spicy salt when mixed with dried chilli, another plant that grows so well in the garden, some Himalayan pink salt and a little smoked pimenton.

Before juicing your limes for other recipes, peel them and place the zest or rinds in a heatproof container near a heat source. Mine dried in a terracotta container on top of a wood stove within minutes, perhaps too quickly. To maintain that green colour, leave them on a dish on a mantelpiece when the fire or gas is going. The peels, once hardened, are ready to use.

First gather your ingredients. Use organic limes and chillies if you have them on hand. Grind some whole dried chilli, then grind some dried lime peel and then measure the salt and pimenton. I prefer to mix the components after grinding them separately so that I can tweak the flavour if needed, but you can throw the whole lot in the grinder at once if you prefer.

Whizz the ingredients in an electric spice grinder. Store in a jar.

This salt gives a great flavour boost to plain foods such as fish, grilled chicken, breakfast eggs, or, as shown below, sprinkled on red rice and tuna fritters.

P.S. While on the subject of drying peels, I save all the mandarin and orange peels to dry in the same way. They provide a beautiful orange oil aroma to the atmosphere and work like magic as fire lighters. If you have an open fire or wood stove heater, I urge you to dry your citrus peels.

Cooking has taken a serious nosedive around this casa of late. It’s always the same after returning from a trip. The reality of cleaning, cooking, planting garlic, raking Autumn leaves, making compost, pruning, just to name a few tasks on the never ending list, makes me want to run away. Combine this cooking reluctance with Melbourne’s cold weather, a house full of bronchitis, a dodgy shoulder, and a very inviting wood fire and a stack of novels, and there you have it: ‘let them eat cake’, she said.

This little cake was fast to make, didn’t involve too much mess for someone else to clean up, and goes very well with cups of tea, books and lethargy.

Preheat the oven to 180°C. Butter and line a 30 cm loaf tin with baking paper, then butter again.

Place the butter and zest in  a mixing bowl of a stand mixer and beat until light and creamy. Add the sugar gradually and beat well after each addition. Add the eggs one at a time and mix well. Fold in the flour, poppy seeds and yoghurt, alternating between wet and dry. Spoon into the prepared tin. Bake in a preheated oven for 30-35 minutes until a skewer comes out clean. Leave for 5 minutes then turn onto a wire rack.

To make the syrup, place the juices and sugar in a pan, simmer gently and stir continually until the sugar dissolves. Make holes in the cake with a skewer and pour the hot syrup over the hot cake, aiming at the holes and centre.

The cake will last for three days, but ours didn’t.